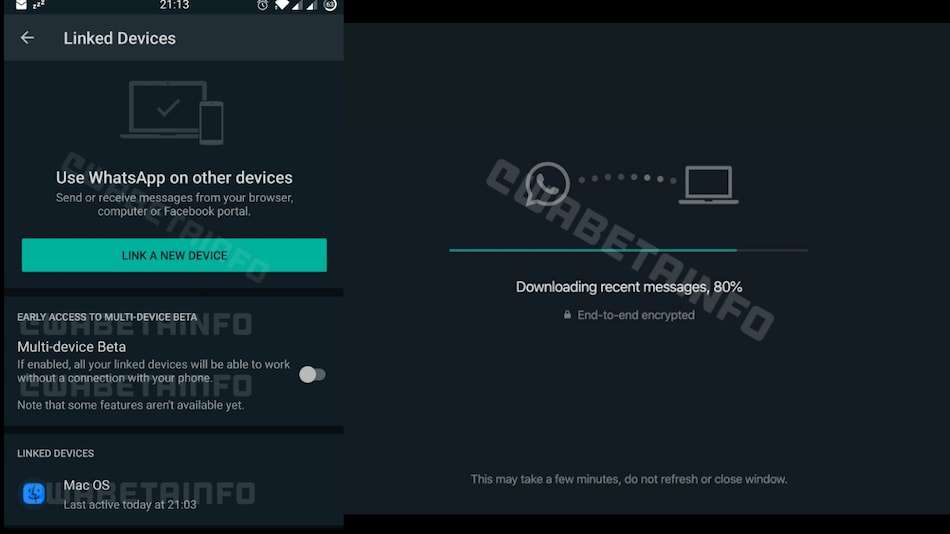 As per a note by WABetaInfo, a tracker that digs deep and finds new features in WhatsApp beta versions, the instant messaging app’s much-awaited multi-device feature is in the last stages of testing across platforms – Android, iOS, and Desktop. The feature lets WhatsApp be used on up to 4 devices at a time, and access non-mobile devices without an active Internet connection on your phone. In its latest post, the publication clears the air over the rumours about the feature on the Internet. It reiterates previously reported developments, and claims that while all multiple devices features are not yet ready, the ability to sync chat history, muting your chats, starring/delivering messages, and other features can be expected for beta testers soon.

WhatsApp is also said to be planning a new modern UI for the desktop client. The publication shares a screenshot where the WhatsApp desktop client shows the user how the chat history is migrated from a user’s device to a PC and notes the process is end-to-end encrypted. The feature, which is speculated to debut as a Linked Devices, is said to allow users to use the same WhatsApp account on four devices simultaneously.

In a previous note, WABetaInfo claimed that WhatsApp would require a Wi-Fi connection to begin the multiple device support process. This would enable sharing of data from one device to another. Once the data has been shared, Wi-Fi or Internet won’t be needed on the primary device. This holds a great significance because currently one needs an active Internet connection on the primary mobile device to continue using WhatsApp Web.