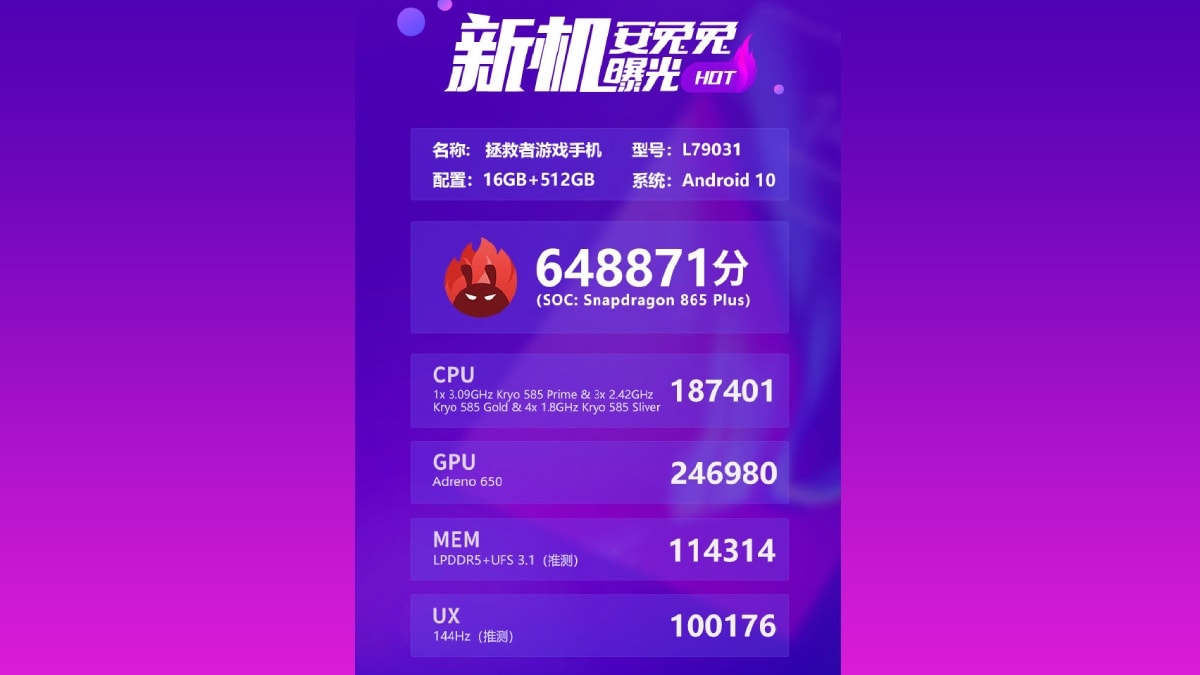 The listing also revealed several more details on the hardware of the upcoming Lenovo gaming phone. For starters, it tips the Lenovo Legion would run on Android 10, carry 16GB of RAM (expected to be LPDDR5) and have an inbuilt space of 512GB.

The Snapdragon 865 SoC is said to be higher clocked than the current model, tipping the use of a Snapdragon 865+ SoC. It is shown to be clocked at 1 x 3.09GHz Kryo 585 Prime cores, 3 x 2.42GHz Kryo 585 Gold coresand 4 x 1.8GHz Kryo 585 Silver cores. In terms of graphics, the Lenovo phone is shown to carry an Adreno 650 GPU. With its LPDDR5 RAM and UFS 3.1 storage, it is expected to cut down time spent on loading screens to a great extent. The UX test also suggest a refresh rate of 144Hz.

With its impressive features, Lenovo Legion is expected to compete against the equally powered Asus ROG Phone 3, which is expected to launch on July 22. Back in June, Lenovo confirmed that Legion will be unveiled in July. However, no official date was announced.

It was also speculated that the Lenovo Legion Gaming Phone will feature a full-HD+ display with a screen resolution of 1,080×2,340 pixels with a 144Hz display refresh rate and a 270Hz touch sampling rate. The phone may also come equipped with a 5,000mAh battery. However, no official announcement on the specifications have yet been made by the brand.