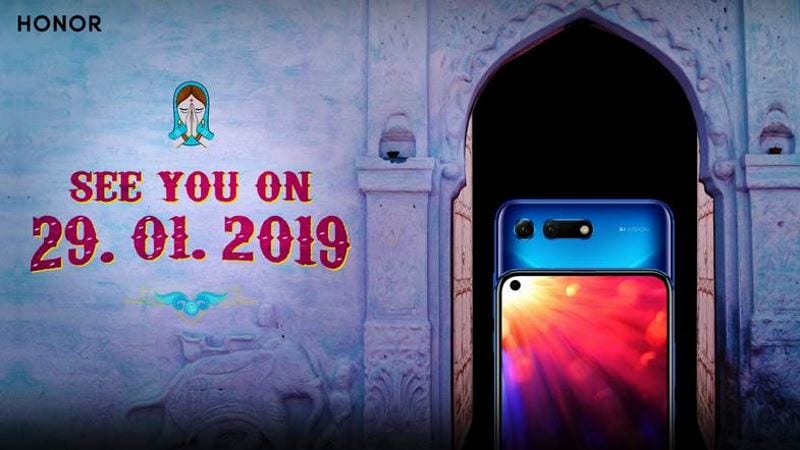 Honor View 20 is ready to make its way to the Indian market. The smartphone, which is the international variant of the Honor V20 smartphone, will be unveiled on January 29 in the country. Amazon India has already revealed that it will be exclusively selling the Honor View 20 in the country, however the pricing and exact availability details remain unclear for now. Honor is a sub-brand of the Chinese telecom giant Huawei and currently sells around 10 phones in the country.

The Honor View 20 was originally unveiled in China in December 2018 as the Honor V20. The View 20 will be officially introduced for international markets at a press event in Paris on January 22, following which it will make its India debut on Amazon.in.

Although Honor India is yet to officially announce the price of the Honor View 20, the China price of the phone does offer some indication on what we can expect. The Honor V20 starts at CNY 2,999 (roughly Rs. 30,400) in China for the 6GB RAM + 128GB storage option. The price goes up to CNY 3,499 (roughly Rs. 35,500) for the 8GB RAM + 128GB storage option and CNY 3,999 (roughly Rs. 40,600) for the Moschino Edition. The phone is already on sale in the Chinese market and is likely to be available immediately after the January 29 launch in the Indian market.

Considering that the Honor View 20 is the global variant of the Honor V20, it is expected to pack identical specifications to those of the Chinese model. The phone will feature a 6.4-inch full-HD+ (1080×2310 pixels) display with 19.5:9 aspect ration and 398PPI pixel density. It will be powered by 7nm octa-core HiSilicon Kirin 980 SoC and include up to 8GB of RAM.

The Honor smartphone’s inbuilt storage will be 128GB or 256GB, depending on the model. There is however no memory expansion slot in the phone. Additionally, the Honor View 20 packs a 4,000mAh battery and the connectivity options like Bluetooth v5.0 and Wi-Fi 802.11 a/b/g/n/ac. There is USB Type-C port as well on the phone.

In terms of the software, the View 20 runs Magic UI 2.0 based on Android 9 Pie. The Magic UI is very similar to its predecessor the EMUI, apart from a new colour scheme, real-time in-call voice translations, and more.

Lastly, the Honor View 20 features a dual-camera setup on the back with a 48-megapixel Sony IMX586 sensor with an f/1.8 aperture and a secondary 3D Time of Flight (ToF) sensor. There is a 25-megapixel front camera as well on the phone with f/2.0 aperture and fixed focus support.

Meanwhile, Honor India is preparing to launch another smartphone – the Honor 10 Lite – in India. The phone was introduced in China in November 2018.