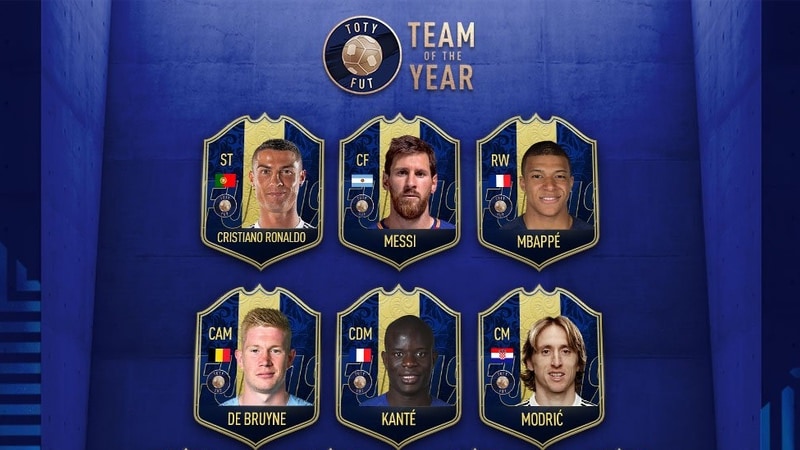 The FIFA 19 team of the year has been announced and this year’s list of top players is a bit controversial thanks to some notable omissions. The FIFA 19 team of the year (TOTY) comprises the best players in the game and these players are being slowly added to FIFA Ultimate Team via in-game packs. Forwards have already been added to Ultimate Team via packs and the other players will be added in groups. FIFA 19 TOTY players aren’t going to be cheap in the game so expect to unlock these only if you have millions of coins per player — with the top forwards expected to cost around 10 million coins each.

Here’s the FIFA 19 team of the year, announced via Twitter:

The FIFA Ultimate Team card pack economy is a massive money maker for EA Sports, so you face very slim odds to get one of these players via a pack. You can buy a player pack with FIFA coins, which cannot be purchased for real money. You can play the game to earn FIFA coins and it takes a lot of grinding to reach a point where you can pay millions for a pack that has Ronaldo or Messi. The other way to get coins is to buy FUT Points for real money, use that to buy card packs, and sell players you get via these card packs for FIFA Coins in the in-game transfer market.

Even if you open a pack at such a high price, there are very limited numbers of Messi, Ronaldo, and Mbappe in these packs. If millions of players buy card packs, only a very small fraction of players are going to get the top players. There’s no guarantee that you can get Ronaldo or Messi in your team unless you get extremely lucky.

The FIFA 19 TOTY hasn’t been received totally positively because of several notable omissions. It’s interesting to see that the team of the year doesn’t have star performers such as Harry Kane, Neymar, Mohamed Salah, Paul Pogba, Eden Hazard, and Antoine Griezmann, among others. Some of these players did make it to a shortlist and you can still vote for your favourite player to become a 12th man in the FIFA 19 TOTY. It’s interesting to see that there’s no proper right-back in the FIFA 19 TOTY, with three centre-backs and one left-back (Marcelo).

FIFA 19 TOTY was selected in a long process that a ballot box comprising the names of all 55 nominees to be selected in a team with a 4-3-3 formation. Forty percent of these votes were cast by EA Sports and the rest were cast by a group comprising athletes, media personnel, and FIFA community members.