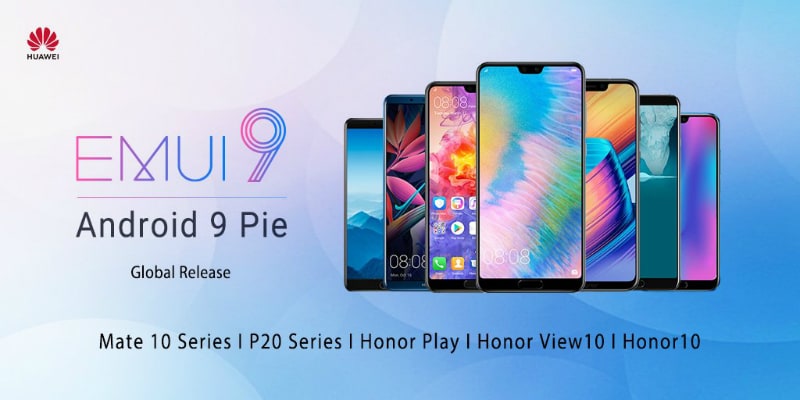 Huawei P20, P20 Pro, Mate 10, Mate 10 Pro, Honor Play₹ 15,999, Honor View 10₹ 29,999, and Honor 10₹ 24,999users have a treat incoming from Huawei before the year ends. The company is now rolling out EMUI 9.0 based on Android 9.0 Pie for all these phones, after making it available in beta for a while. If you own one of these seven devices, the EMUI 9 based Android Pie update should arrive on your phone via an over-the-air (OTA) update. The rollout could be gradual so it may be a while before you see the update on your phone.

Huawei has taken to Twitter to announce that the EMUI 9 based Android Pie update is rolling out for Huawei P20, Huawei P20 Pro₹ 59,999, Huawei Mate 10₹ 16,835, Huawei Mate 10 Pro, Honor Play, Honor View 10, and Honor 10 users. This comes after the EMUI 9 based Android Pie update was rolled out to Huawei P20 and Huawei P20 Pro users in China earlier this month. The new update is a global release, which means that it may be a while before all users see the update notifications.

We recommend you keep checking manually by heading over to the Settings Menu. It is advisable to update your device under a strong Wi-Fi connection and at least 80 percent battery life, or while the phone is on charge.

EMUI 9 based on Android Pie brings along a new UI, gesture-based navigation, and HiVision visual search that lets you do image search just like Google Lens. Huawei claims that HiVision recognises landmarks from 15 countries as well as over 10 million famous artworks. It also recognises a great range of food items and can provide a calorie estimate for users who are conscious of their calorie intake.

It also brings a new feature called HiTouch that enables users to search for something online by long pressing two fingers on an image. The company claims that this feature can recognize more than 120 million items from more than 200 e-commerce platforms and the official online stores of nearly 100 brands. With EMUI 9.0, Huawei also brings one-click projection, GPU Turbo 2.0, and PC Mode as well.