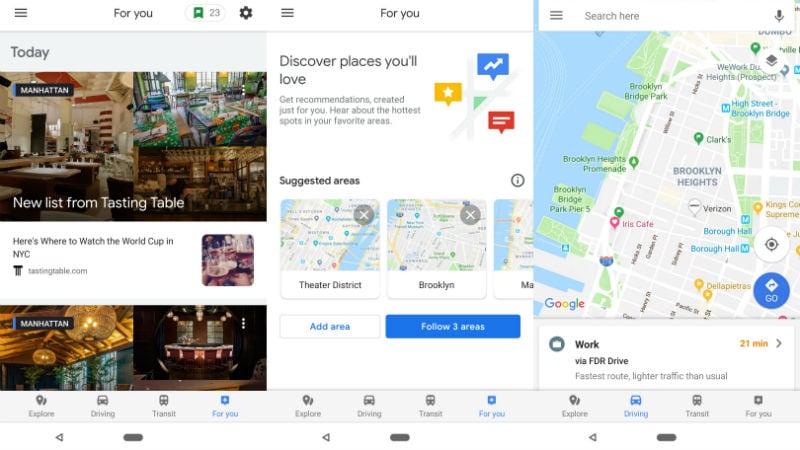 In May 2018, Google Maps received several new updates at the company’s I/O 2018 annual developer conference. Among the new features, the Google Maps ‘For You’ tab was announced and was promised to arrive later this year. The new tab offers a customised view of trending places in areas that you choose to view. Users could select areas or dining spots to follow, from which updates like matching, trending, newly opened, and popular places will be shown in the For You tab. It appears that for a lucky few users, Google has already started to roll out the For You tab, as is reportedly showing up in the Google Maps app.

A Reddit user has reported that new ‘For You’ tab is being rolled out in the Google Maps app, but said that the feature is apparently “unfinished.” The user wrote, “Basically, after following neighbourhoods, you get links to curated lists from publications, which takes you to an AMP page and a link at the bottom saying ‘view places on map’.” He added, “Obviously, the killer feature is taking an article, and then porting those locations onto Google Maps so that you can easily get directions (this is seemingly what the “view places on map, would do), but it crashes every time I click on it.”

As per an Android Police report, some more smartphones have received the new Google Maps For You tab as well. The report says that list will get added automatically based on a user’s search history. Also, the new tab said to have a “modern look,” in line with Google Maps’ Material Theme Redesign, the report adds. According to the reports, the main view of the For You tab will showcase “notable spots this week.” Users can also add places to favourites and “want to go” lists.

As it appears, For You tab in Google Maps may have a slow rollout, so all of the options may not be available to all users until the final and official release. However, it is interesting to the new tab starting to roll out already.